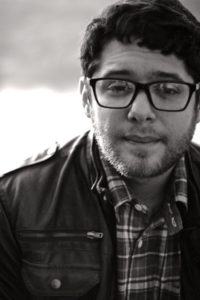 Well, hello there. You’ve reached the website of Vincent Scarpa. If you’ve found yourself here accidentally—perhaps you were in fact searching for Vincent Scarpa the landscape designer and not Vincent Scarpa the writer—don’t sweat it. Water off a duck’s back. But if you’re here on purpose, I suppose I’ll tell you a bit about myself.

I was born and raised in Vineland, New Jersey, a small town outside of Atlantic City. The first time my father brought me to the library, I couldn’t believe they let you borrow books for free. I mean: he had to have a librarian affirm this for me. It seemed an impossible gift, and it still does. I fell in love with language, with books, with the writers who wrote them; a romance that continues and, I have every reason to believe, always will.

After high school, I moved to Boston to attend Emerson College, where I majored in Writing, Literature, and Publishing and double-minored in Critical Theory and Women’s, Gender, and Sexuality Studies. I had the opportunity to study under writers whose work I deeply admired and whose insight and instruction I treasure to this day—writers like Pamela Painter, Jessica Treadway, Kevin Miller, and Jerald Walker, to name just a few. I wrote a weekly column for Emerson’s student newspaper, The Berkeley Beacon, and was the Fiction Editor for The Emerson Review, an annual literary magazine. During these years, I also began doing outside freelance work; work I continue to do to this day. I started off writing album reviews and profiles for Performer Magazine, and in the years since I’ve freelanced for outlets including Kirkus Review, Electric Literature, Tin House, Lit Hub, and many more, where I’ve written craft essays, book reviews, and interviewed writers like Karen Russell, Maggie Nelson, Mary-Louise Parker, Adam Johnson, and Jim Shepard.

I graduated from Emerson in 2012 with a Bachelor of Fine Arts degree and some publication credits to my name, but I knew there was still so much more for me to learn and I wanted desperately to remain in the company of people who’d devoted their lives to language. I applied for graduate school the following year, and by what still seems to me to be a stroke of extraordinary and incomprehensible luck, I was accepted as a Fiction Fellow at the Michener Center for Writers at the University of Texas, one of the country’s top MFA programs in creative writing. For three years I was afforded the unspeakable blessing and privilege of time and endowment, and they were the best, most formative, most necessary years of my life. And how could they be anything but? I found myself a student of writers whose work had been so important to me as an undergraduate—writers like, Elizabeth McCracken, Lisa Olstein, Rachel Kushner, Geoff Dyer, Joy Williams, Karen Russell, Naomi Shihab Nye, and Colm Tóibín. I learned as much from them as I did from my peers: a cohort more talented and generous than could scarcely be imagined.

While living in Austin, I worked first as an Associate Editor for the literary magazine American Short Fiction and then as the Managing Editor for The Austin Review. I was also an instructor at the University, where I taught a class called “The American Short Story After 1950.” The summer before my final year in the program, I was a Guest Lecturer at the Simon’s Rock Young Writers Workshop in Great Barrington, MA.

I completed the Michener program in May of 2016 after defending my thesis: Anchorage, a draft of a novel, on which I remain at work while living back in my hometown.

In the time since I began writing, I’ve had the great fortune of having my stories, essays, and poems appear in literary journals like Indiana Review, Brevity, Hayden’s Ferry Review, NANO Fiction, StoryQuarterly, Hobart, DIAGRAM, and many others. I’ve been a Pushcart Prize nominee every year since 2012, and have been equally grateful to see my work reprinted, as my story “Easter, 1991” was in the Best Small Fictions 2016 anthology and my essay “I Go Back to Berryman’s” was in the textbook The Practice of Creative Writing. In 2012, my story “I Hope You’re Wrong About Scottsdale” won the Norman Mailer College Fiction Award, and four years later a story of mine called “Be Yourselves” was the recipient of the Cecilia Joyce Johnson Fiction Award. You can click the “CV” tab for a complete list of accolades and publications both academic and creative.